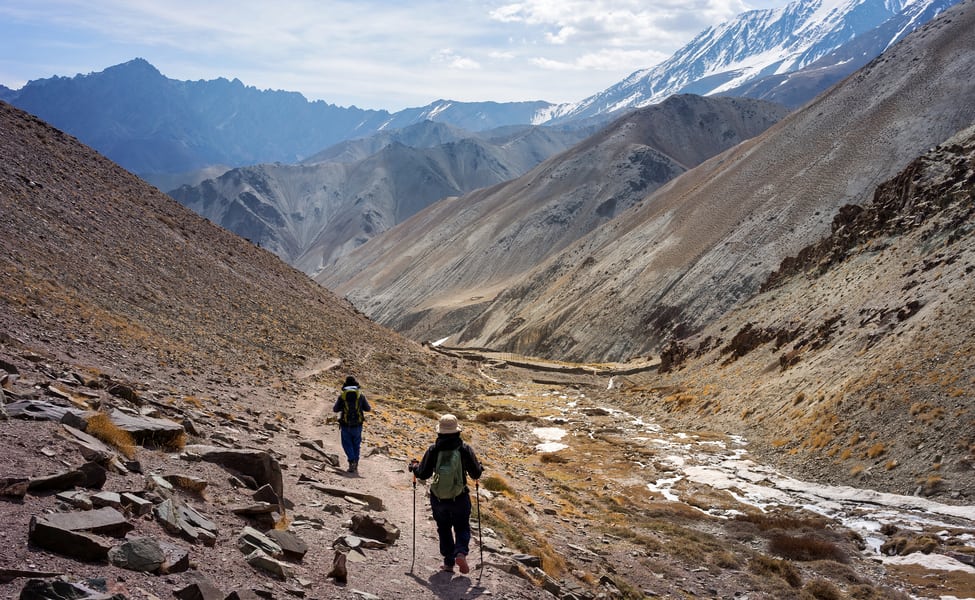 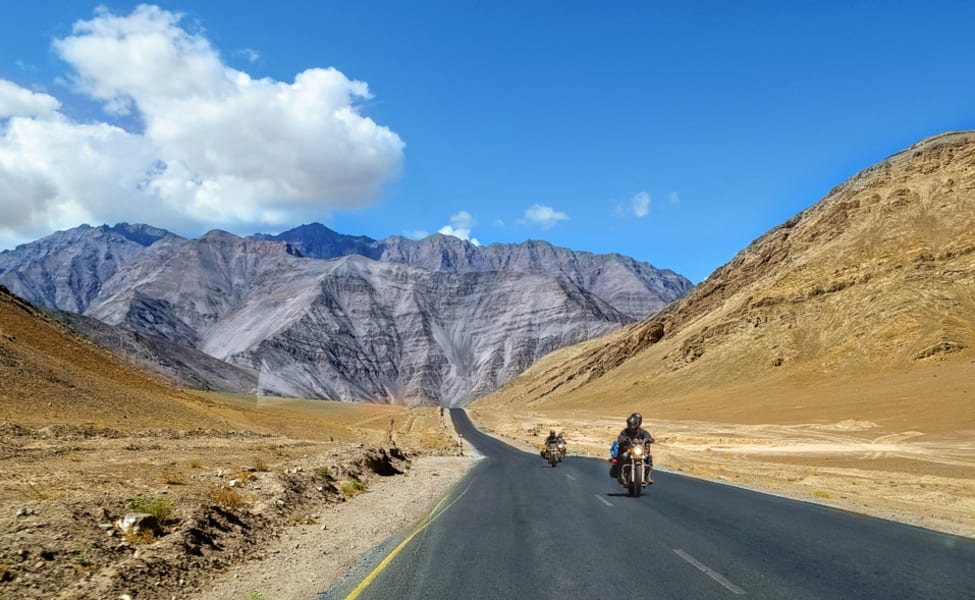 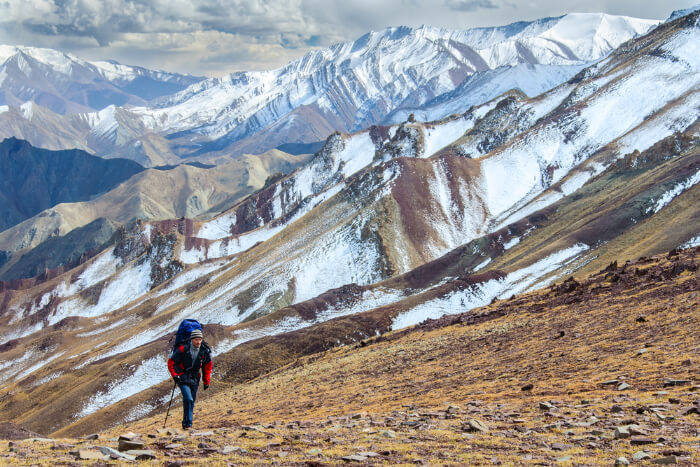 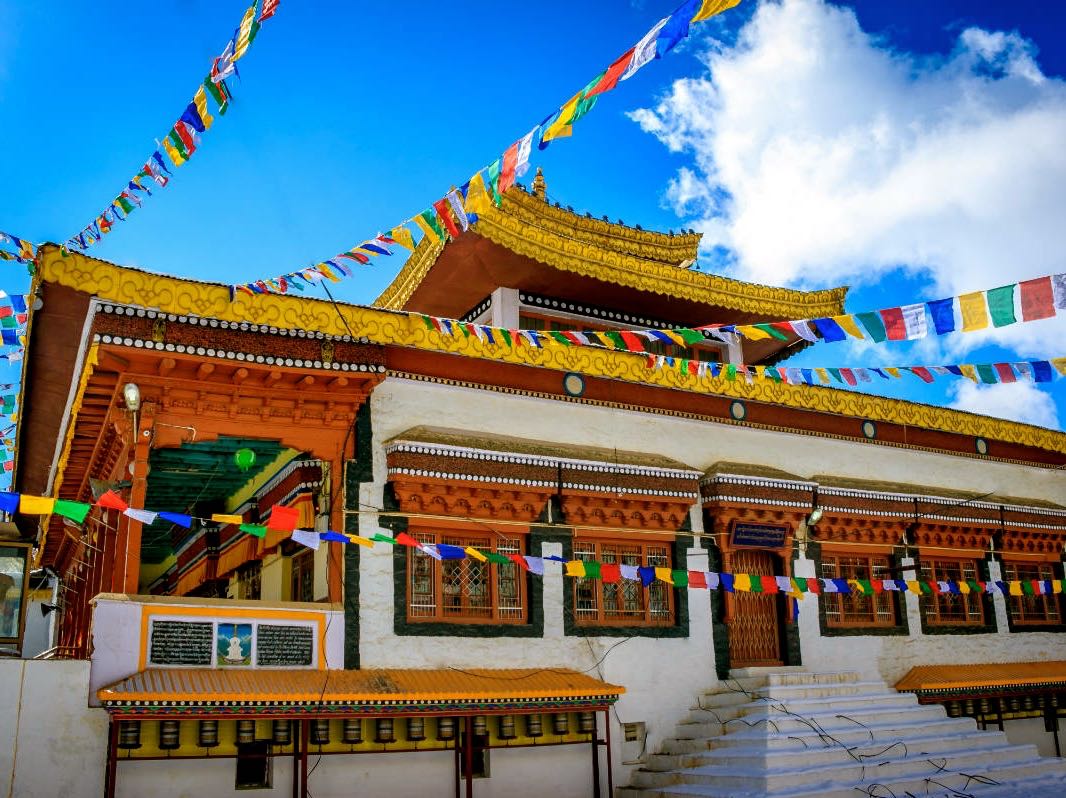 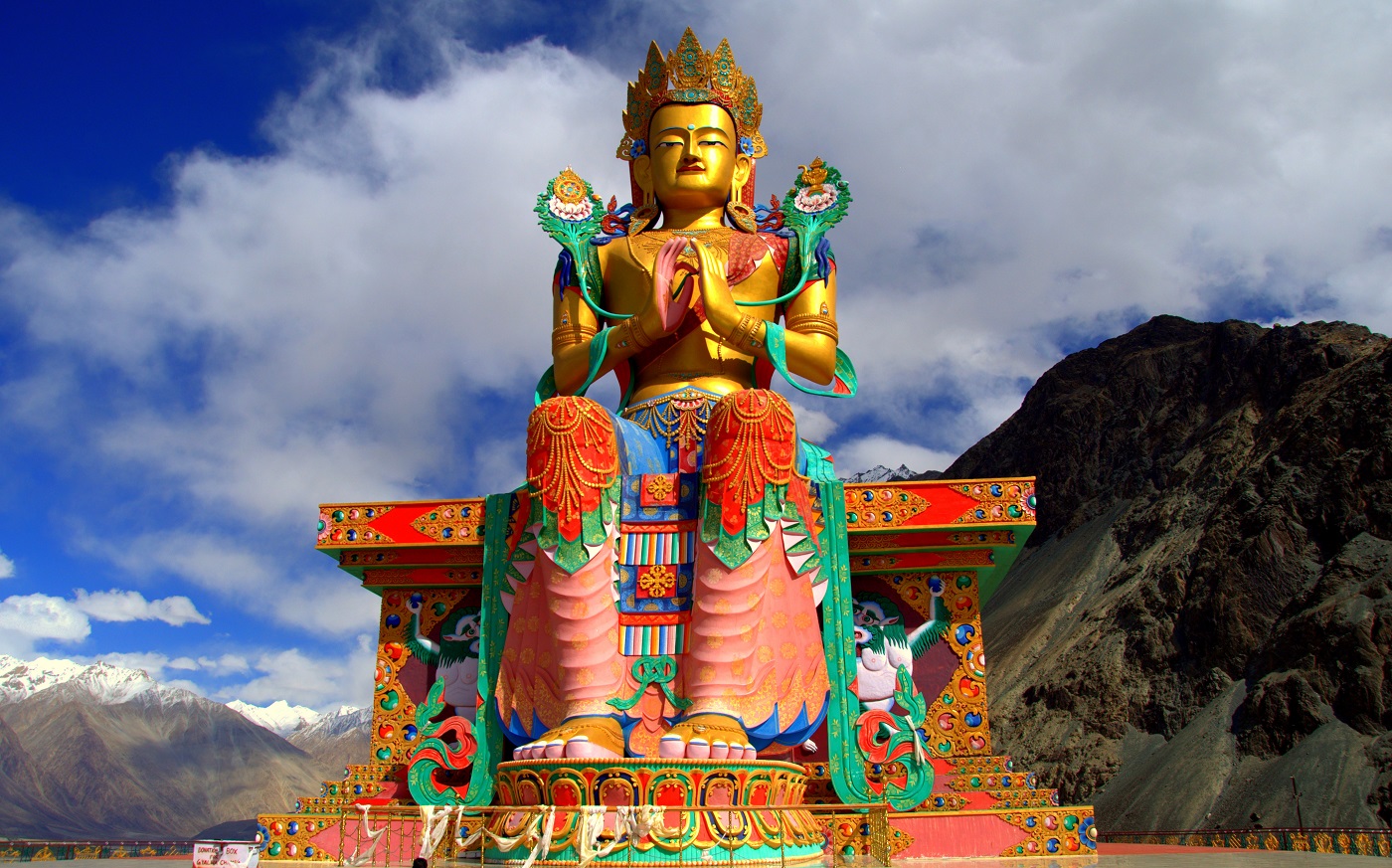 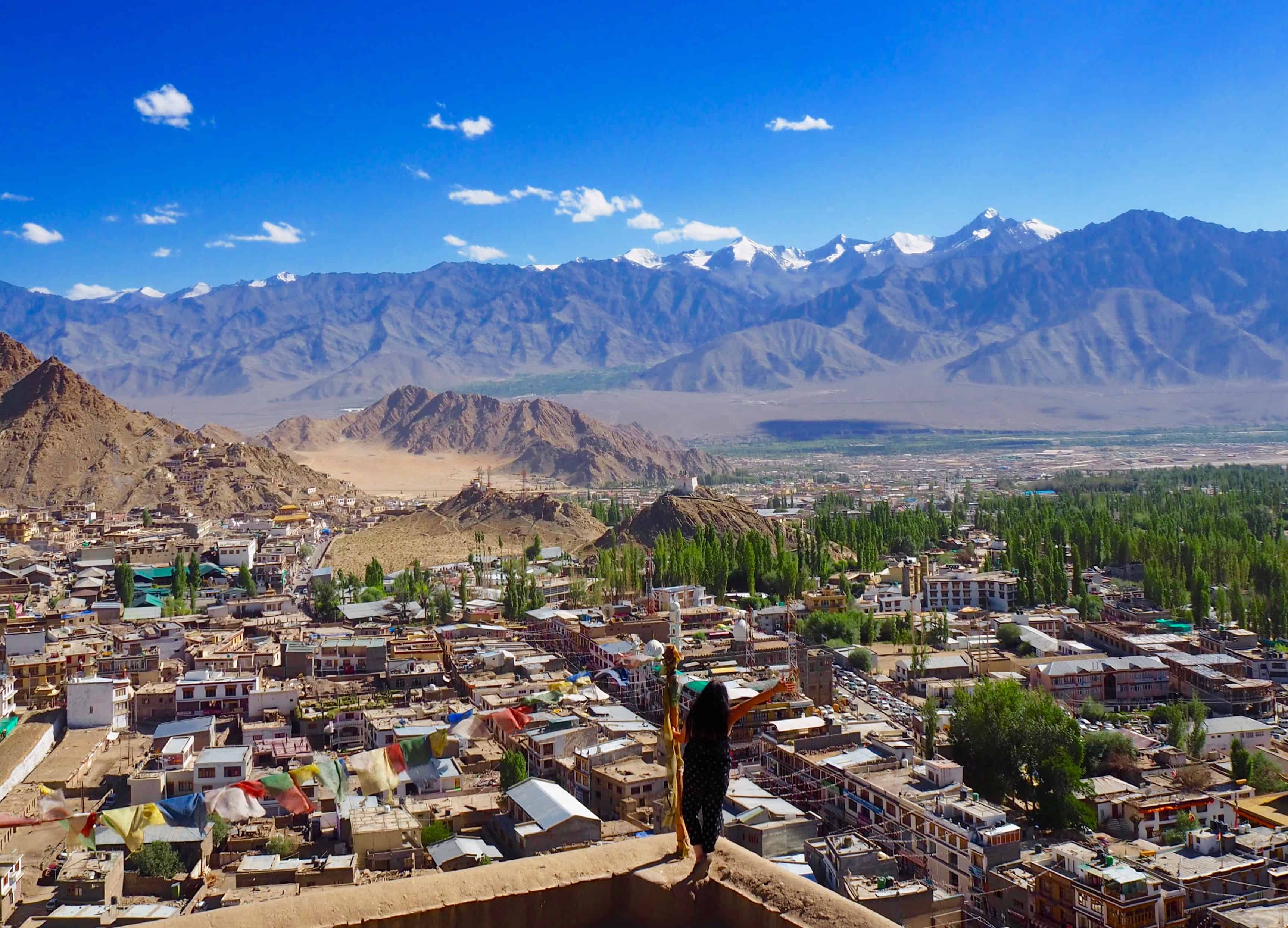 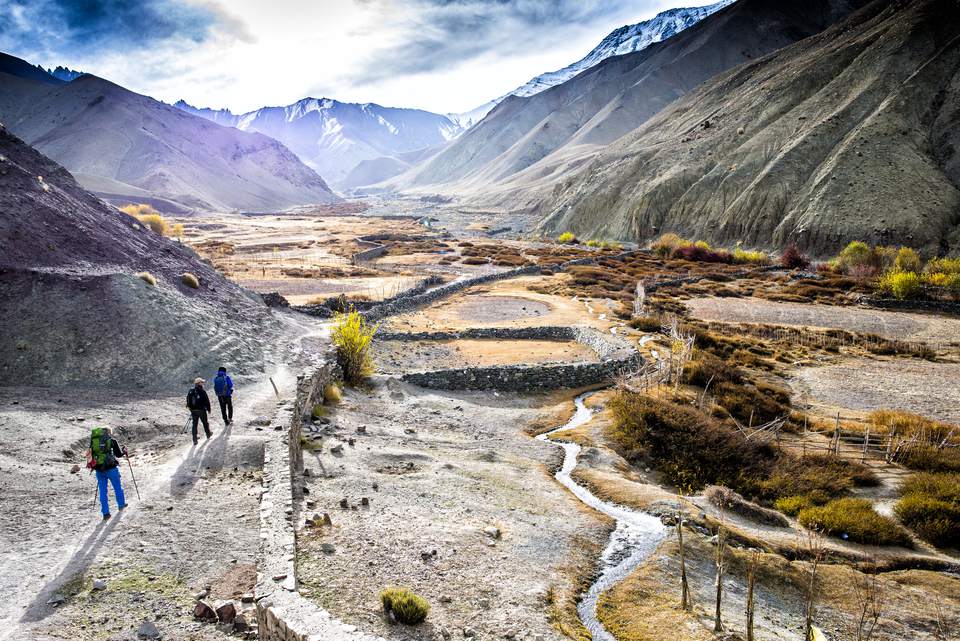 Arrival at Leh airport and transferred to the Hotel. Later evening visit to Leh Market, Leh Palace and Shanti Stupa.

Shanti Stupa is a Buddhist white-domed stupa (chorten) on a hilltop in Chanspa, leh-Ladakh, in the north Inndian state ofJammu and kashmir It was built in 1991 by Japanese Buddhist Bikshu Gyomyo Nakamura and part of the peace The Shanti Stupa holds the relics of the buddha at its base, enshrined by the 14th diala lama The stupa has become a tourist attraction not only due to its religious significance but also due to its location which provides panoramic views of the surrounding landscape of Leh Town.

Leh Palace :- This Is the Leh-Palace which is nine-storey dun-colored palace is Leh’s dominant structure and architectural icon. It took shape under 17th-century king Sengge Namgyal but has been essentially unoccupied since the Ladakhi royals were stripped of power and shuffled off to Stok in 1846. Today the sturdy walls enclose some exhibition spaces and a small prayer room, but the most enjoyable part of a visit is venturing up to the uppermost rooftops for the view.

Alchi monastery:- Alchi monastery is located approximately 60 kms west of Leh off the main Kargil Leh toute near Saspol. Alchi Gompa was established in 1000 AD, by Rinchen Zangpo. The Alchi Monastery is famous for the murals which adorns the walls of this ancient gompa although most of them require restoration and unfortunately few of the murals are beyond repair. The Alchi monastery is now managed by monks from the Liker gompa. The two main temples in Alchi are the Alchi Du-khang and the Sum-tsek but there are also many smaller buildings to explore.

Sangam :- The sangam point is located on the National Highway 1 to Srinagar. Watching the confluence of the muddy zanskar water with the bluish green Indus is so breathtaking. En route to the sangam point one can visit the Hall of Fame Museum, Gurudwara Pathar Saheb and Magnetic Hill.

Khardungla:- Khardung La (in Tibetan, La means pass) is situated at a distance of about 40 km from Leh. The pass offers amazing views of the valley and the roads winding up the mountain. The pristine air, scenic vistas and the feeling of being on top of the world have made Khardung La a popular tourist attraction. It figures high as a must visit for every tourist visiting Leh. So huge is the tourist rush that traffic jams are inevitable At an elevation of 18,379 ft, Khardung La is the world’s highest motorable road and serves as gateway to Shyok and Nubra valleys in Ladakh. Located in Ladakh the high mountain pass is in the Karakoram Range north of Leh.

Overnight at Nubra Valley in camps.

After breakfast visit Deskit Monastery (Big Buddha), where you can have a magnificent view of Nubra Valley and drive back to Leh by same Route, crossing Khardungla Pass.

Diskit Monestary :- Diskit Monestary is located 150 km north of Leh city, the capital city of Ladakh on a hill, just above the flood plains of the Shayok River in Diskit village more than 10000 ft above sea level. Khalsar is a small town agead of Khardung La from where a left turn would take you to Diskit while the right turn leads to Panamik.The monastery founded by Changzem Tserab Zangpo, a disciple of Tsong Khapa, founder of Gelugpa (Yellow Hat) sect of Tibetan Buddhism. This is the oldest and the second largest Buddhist monastery in Ladakh after Thiksey monastery.

Arrival at Camp, later free time at leisure and enjoy the color changing lake and the sun set on the banks of the lake.

Early morning enjoy the picturesque view of Sunrise on lake. After breakfast drive back to Leh, on the way visit Thiksey Monastery and Shey Palace.

Thikse Monastery :-Thikse Monastery is a Tibetan Buddhist monastery of the Yellow Hat (Gelugpa) sect, located on top of a hill, approximately 20 kilometres east of Leh in Ladakh, India. It is noted for its resemblance to the Potala Palace in Lhasa, Tibet and is the largest gompa in central Ladakh. The monastery is located at an altitude of 3,600 metres (11,800 ft) in the Indus valley. It is a 12-storey complex and houses many items of Buddhist art such as stupas, statues, thangkas, wall paintings and swords. One of the main points of interest is the Maitreya (future Buddha) Temple which is installed to commemorate the visit of the 14th Dalai Lama to this monastery in 1970. A 15 metres (49 ft) high statue of Maitreya, the largest such statue in Ladakh, covering two storeys of the building is deified in the monastery.

Early morning transfer to Leh airport to board flight back to destination.